Category: Life as we know it

I was going to write a post about risk and reward today. About executive pay, and how it relates to responsibility in business. The news have been abuzz these days with managers and executive officers raking up the millions in bonuses, even if their companies don’t function very well. Which is another way of saying “bankrupt”.

I was going to write it – in fact I got most of the way through, but I got stopped in my tracks. What have I got to do with all this? I don’t even know what a million dollars looks like. Most of us don’t, and most likely never will.

It’s an alien world, the one I was going to write about. What I learned of it are disparate, small, loose pieces of a puzzle I never got to see before it broke down. What do I know about how these people take decisions? They’re flipping coins in their penthouse offices, for all we know. Or maybe they rent time on SETI@home and fire up huge, complicated social simulations that model market behaviour for the next 5 to 10 years.

We hear the stories of CEO excess, the unbelievable nerve of some early-pensioned bankers, the huge stock incentives that compensate for those symbolic one-dollar salaries. The private jets. The yachts. The lifestyle. The news would boil them alive, just. And we still know nothing about them.

Footballers, we can understand. They too rake millions, but we know why. They can hit a ball. We can hit a ball. We can relate. CEOs, they don’t even speak the same language. They gather thousands upon thousands of air miles a year – the closest any living human ever got to be Superman, with the notable exception of skydivers. They choose, and the companies follow. Like the clans of old, we follow, while at the same time asking for their blood. Metaphorically, of course – that’s what the tabloids are for. Maybe we’re envious. Maybe. Maybe we just want to prove they’re human.

Oh yes we are, don’t pretend otherwise. Those celebrities, they got talent. They got a chance to use it. We don’t grudge them that. These managers, they’ve just been working hard. You could have done that too, if you had a vision of that future. They made it, that’s reason enough to hate. Isn’t it, my dear lynch mob?

Yes. They mean us. The good ones always do. 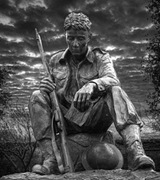 So say we all.

There is only one race, and that is the HUMAN race.

Listen to Edward James Olmos – known as Admiral Adama from “Battlestar Galactica” -Â  speaking on race at the United Nations: