The universe. The great unknown. 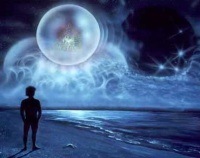 This is a trip down memory lane, and you will hopefully excuse me for indulging. I’ve written the following piece 10 years ago, while sitting in a boring class (not even in my curriculum, but my girlfriend was attending). It was April 6th, 1998. I was 20 years old.

The universe is a great mystery for mankind. For thousands of years, ever since the first man stood on his feet and looked to the stars, he asked himself about it.

What is the universe? Surely, you cannot expect me to have the answer to that question! That’s what we all try to do since the beginning of time; all I want to do is to point out some ideas that crossed our collective minds throughout the history.

The first universe we sense, and beware, sense is the key word, is the universe within our range. Things that we can see, touch, smell, taste or hear form the universe that we call “the real world” – and all living forms have one. We are the center of this universe, which relative to each of us, depending of our (natural) capacity to sense it.

The second universe is the near, or the reachable world. This term refers to those points of the world where we can transfer our real world. The reachable universe occupies only a small amount of space, consisting of the places we can visit – with or without the help of technology. This – as the others that follow – is a virtual universe, because although we can go there, we almost certainly will not, because there is no physical time to reach all the places I am referring to.

The third universe is the known world; it is the universe we can probe using our science and technology. Do not be fooled by its name – it’s not really that known. Since the dawn of man, we looked towards places we couldn’t reach and we tried to figure out what those places were like. Later, when science came up, we came up with a new technique: we experiment, we elaborate on an universe model, then we test that model, which is good until proven wrong or until we find a better one. However, we can only verify our theories in the reachable universe (in fact, in the real one), and by extending our conclusions, we suppose that the universe is the way we say it is.

The fourth universe is the unknown world. Well, this is the one that we know nothing about. Surely, we can extrapolate and assume it’s the way we say it is, but unlike the known universe, we cannot observe it, so the key affirmation here is we just don’t know.1

So, we’ve structured the universe from man’s point of view. Is then man the center of the universe? You might be tempted to say yes. You would be wrong. The only universe you might say has man for a center is the real world. Let’s take a closer look, shall we?

The real world, the first one we talked about, is sense-based. But senses are not always accurate. Therefore you cannot really know your real world if you don’t enhance your senses with technology and science. But can you say then that you know it all?No, we don’t really know the universe. No matter how accurate our technology is, there will always be more information we cannot access (yet), more things to be discovered, more to learn.

Stop! We’ve just found another keyword. Information. The key to all the doors of knowledge, the magic potion, the very essence of it all… What is information? How do you define it? Is it matter? No, it’s not, but it could take a material form. Is it energy? No, because it doesn’t act like it. So it must be a whole different thing. Maybe the center of the universe.

Information is, was and ever will be, regardless of energy and matter. We can say that information just exists. The way to acquire information is also information, and therefore exists too, and so on, ad infinitum. Could we say that we just found God?

I believe energy interacts with information. Energy takes from information a form of manifestation, and gives it an opportunity to manifest itself. They’re bound together and they form a whole. Information and Energy. God and the World he created.