This is the TED talk given by Barry Schwartz on wisdom and moral responsibility. At 20 minutes it is rather long, but well worth your time. From his biography:

The value of money 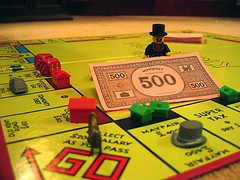 My money’s worthless. But that’s ok, because so are yours. Or rather, they have exactly the value you think they have. Which is a pretty neat trick to pull for a piece of paper.

The main purpose of any commercial enterprise in this world is to make money. Or, to translate in marketspeak, to create value for their customers, and thus create value for themselves. This value is created by you, me, and anybody else who works for a living, by converting our time and skills into products that are useful for other companies and/or other human beings. This has always been so. In the past it was worth knowing how to plow a field, how to shoot a bow, how to distinguish the really bad mushrooms from the merely poisoned ones. These were all skills one could turn into profit.

Enter the banks. Banks do not create value directly, by themselves, but rather help create value, by lending money to active companies and individuals that need money to exercise their skills in order to create value. In return, a portion of this value returns to the bank. Banks also help people save money, and pay interest for the right to use those money for lending. In effect, banks are vast meeting places, where the people that need money meet the people that have money to the mutual benefit of both parties.

Or at least, that’s the theory. In reality banks are no longer safeguarding and managing other people’s money. Banks have and produce value in themselves, above and beyond what is needed to function as a bank. They use their guarantees and deposits as assets, which can themselves become guarantees if the bank itself needs to borrow money. And past events teach us that this reality is quite prone to abuse, often with catastrophic results.

It all boils right back down to value. Since value is a subjective property, driven by the marketplace’s two opposing forces, Fear and respectively Greed, there is always a risk factor involved when evaluating the value of an asset or investment. Take salt, for example.

Salt is now by and large a commodity, to be picked up once a month at the grocer’s and passed around at the dinner table. But it wasn’t always so. Before we discovered how to extract salt from the sea, the only way to acquire salt was to dig deep in the earth an pray for a salt vein. Salt was expensive, treasured. Wars were fought for control over salt mines. And to spill the salt was to invite serious trouble upon oneself.

Now imagine that you would buy a salt mine mere days before the sea salt extraction process came into power. Your rock-solid investment, 100% guaranteed profitable by a thousand years of history will become a loser overnight. Your net worth would plummet accordingly. Any loans that may have been available to you against that mine are now a pipe dream, and if you’re really unlucky you have your creditors knocking at your door.

Those were the salt bubble days. We’re now in the housing bubble days. There also were a dot com bubble, an Asian market bubble, an African lending bubble and lots and lots of other smaller bubbles, distanced about 10 years apart. Each of these bubbles was new and unexpected. Each of these bubbles taught us absolutely nothing about risk management in the marketplace. And if you disagree, get in touch; I can tell you all about some really hot opportunities – biotech startups, gene sequencing, next-gen targeted viruses… the way of the future, man! You can’t afford to miss it!

We came pretty far ahead of our mammoth-hunting ancestors, don’t you think? I mean, we’ve got cars and jobs and ready-made meals and television and airplanes… not to mention Internet. We’re doin’ alright, friend. At least those of us who got money.

The dough. The ice. The cold-hard cash. Whatever you want to call it, it spins the world around, and takes our lives along for the ride. The loot. The little pieces of paper (or plastic for some). The greatest game we ever invented for ourselves.

In the beginning we had hunters. Hunters brought the prey back to the cave, paying it in full with wounds and hardship and often enough the lives of other hunters. They sat, ate their fill and received the tender love and praise of the rest of the tribe, as well as a right to choose from the goods made out of the unlucky animal. It was called trade.

Later communities grew. We discovered agriculture, and traded our grains for the fruits and beasts of the forests. We made markets, where people could meet and exchange what they had. But you know all of this. Fast-forward when the first money was born. The king placed a stamp of approval – namely his word – on a piece of hard-to-find metal. Or seashells. Or ochre. Whatever the medium, people started believing that money had an intrinsic value, something to strive for, work for, risk one’s life for, and even kill, if necessary.  That’s where it all started.

At least we all agreed to measure it against something. That something was gold. At least for a while, all the money in the world were covered by, and could be converted to gold. People did not want gold for its sake – some argue it is “pretty”, but I’ve personally never seen the aesthetic value of a lump of cold metal. You couldn’t even use it for something useful (aside from some applications in microelectronics and high-end audio, but those where out of the question back then). But the mere fact that everyone suddenly wanted it made its value frighteningly real.

Anyway. Nowadays we don’t even have this feeble link to reality. The money stopped being related to one country’s gold treasure, and started being valued against its GDP. For those of you not into economics, that’s an imaginary value obtained by selling everything a country produces within a year. Furthermore, this number is sometimes “adjusted” by some countries upwards – to be able to obtain certain advantages on the foreign capital markets. We even invented a whole new science – the aforementioned economy – just to deal with this imaginary world. And, speaking of economy? Its anything but.

This is the greatest game ever invented. Generations lived and died by it, and chances are you will too. The Europeans wiped out whole civilizations in the name of the great game. Americans are poised to do the same. We grow up learning about the value of money, and we spend all our adult life in touch with it in one way or another. Want proof that it is all a game? Have a look at airline ticket prices to your favorite destination, and answer me this: why is it that the same flight, with the same plane, eating approximately the same amount of kerosene is costing SO much more if you’re flying back the next day? Or on Christmas eve? Because economics dictates it to be so. The law of supply and demand presently demands that you supply twice the sum for a business trip. Halleluja.

Could it be otherwise? I wonder. Jack Vance imagines in his story “The Moon Moth” a world where prestige is all the currency there is, and prestige is gained through daring deeds and personal qualities. Another view – in another book I’ve read lately, Cory Doctorow‘s “Down and out in the magic kingdom” – speaks about whuffie points, which they can earn by contributing to society. Both books are quite enjoyable, and both systems are unlikely to ever replace currency in our daily lives. And that’s a shame, really, because we need the change. We’re so absorbed by the economic aspect that we are literally frying up this planet because it’s economically sound to do so.

En fin. I’d love to sit and chat some more, but I gotta get back to work. What can I say? I need the money.

PS. By the way, some things in life really are free. Cory’s book is available for download, just follow the magic link and see for yourself.