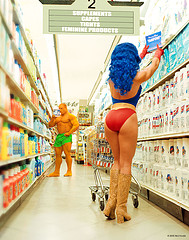 Contrary to what Marvel or DC might want you to think, there is no such thing as superpowers. A statement which, if you’re not under 12 or have a double-digit IQ, won’t strike you as odd, or even the least bit surprising. Indeed, if evolution taught us anything, it’s that natural occurring superpowers are nigh-impossible. James Randi made it his life work to prove that mystical superpowers are by and large a hoax. And while technology-based superpowers (the other kind) may occur, the large-scale adoption of said technology will soon throw it back into the realm of the mundane.

In a way though we all have superpowers. We project our voices around the globe! We can read and write across vast distances! We can travel faster than a speeding bullet!1 And yes, we can even fly.

But that’s not what a superhero makes. As Stan Lee probably guessed decades ago, what we like the most about superheroes is that they are unique – in their respective universes, of course. They have something to set them aside from regular humans. The power to fly without using an airplane. Or a hot air balloon. Or a lawn chair. The power to read minds. The power to wear underwear over pants without anyone laughing out loud. The power to shuffle the cards with the aces on top. It’s something they excel at, something nobody else has, something that makes their life choices easy.

Oh boy. You’re in high school, your conscious mind barely awoken, and you hear this one word over and over again. Potential. You have it, or you don’t. Or you have more than one. You could be a doctor. Or a programmer. Or a lawnmower man. Or you could be so damn good at flipping burgers, you’d go and open your own franchise. Everybody’s talking about what you could or couldn’t do. And the hard part, the real bitch is this: you need to choose. And keep on choosing, until one of those potentials is realised, and the others are so many steps in the sand.

That’s when you start seeing the lucky ones. The guys and gals who know already what they want to be when they grow up. They decided, they have certainties, and they move ahead. And your mind reels with the possibility: what if you could get something like that too? What if you would know what you’re good at, and pursue it, and become the greatest anyone had ever known – in that field. In that job. In that way of life.

Which is where superheroes come in. Talk about easy choices. Along comes the first girl (or boy) and then you dream up she’s kidnapped by the worst villain you can possibly imagine, and then you fight him, and you win. You prove your courage, and then you act upon it and you ask her out. She accepts gratefully. And so it goes.

There’s nothing wrong in wanting to be good – to do good deeds, to save the planet, to get the girl, that sort of thing. That’s a goal that you can relate to – at least in your tender years. And that explain the success of all those comics-based movies, brought on the silver screen by the power of CGI and the Hollywood top brass’ quest for a guaranteed profit. It reminds us of adolescence, when things were clear-cut and life was simple. We could see the line between good and bad. And we were always on the side of good.

But as time rolled on and life got harder, the lack of that one unique feature became the focus of our blame. If only I could fly. If only I could teleport. If only… my life would be different. It’s orders of magnitude harder to be a superhero with no superpowers. When there’s no easy path cut out in front of you, and the choices you have are gray at best. And you have to choose the best of all possible options, day in and day out.

That is, if you don’t want to wake up one day, look in the mirror and see him. The villain you were fighting all along.