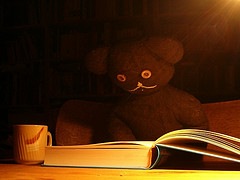 Books are my constant companions pretty much since forever. I started reading when I was about 6 years old, and until now I’ve probably chewed out a few cubic meters of the stuff. I am, without a shadow of a doubt, a book addict. BRA1, here I come.

Like any child of that age, I was really into adventures. It started with fairy tales – folk legends, the Greek mythology (the children’s edition, I’ve got to the heavy stuff quite a few years later), 1001 Arabian Nights, novelised history… Then I ran into Jules Verne, Karl May and Alexandre Dumas (all of them translated in my native Romanian, of course) and that sealed the deal. I was hooked.

As years went by, I kept on going through miles and miles of fine typography. “Shogun“, James Clavell‘s masterpiece that dragged me kicking and screaming into adolescence. Frank Herbert’s “Dune”, with its unparalleled world and insightful characters. Tolkien. Asimov. Clarke. Orson Scott Card. Then Dostoievski, Gabriel Garcia Marques, Hugo and Sartre. Mircea Eliade and Eugen Ionescu. I was moving up in the world. Thomas Mann. Herman Hesse. John Fowles. Heavy, heavy books that I was struggling to understand, complex characters and motivations, refining years and years of the author’s experience and shaped by mature thoughts and desires. Like many before me, I’ve moved then to the arid world of philosophy. Plato. Descartes. Hegel. Kant.

And then there was Nietzsche. And then I stopped.

There’s no describing the sensation after finishing “Thus spoke Zarathustra“. It was as if a perfect mirror was suddenly and without warning placed before me. There I was, trying to find truth among the ink-stained souls of long-gone trees. While I was reading, the world was floating by. 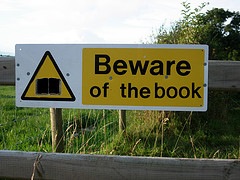 Thus passed the longest two months of my life. No books were open during that period, except for the manuals needed for school. Time was gained, and invested in introspection and long walks. Battles were lost. Battles were won. The world kept on spinning, indifferent to my book-free existence. Indeed, friends, adolescence is truly the Age of the Extreme.

At the end of those months, however, I came to a conclusion. Books were no longer to be read as guiding lights, shining a path upon which one should be striving to walk. Instead, they were to be companions, friends to whom one would turn for comfort. They were objects of art, not worship, and needed to be treated as such. The truth was hiding elsewhere – but that, friends, is a different story, for another sleepless night.

In the years that passed I found more great writers, storytellers, bards and poets. I couldn’t remember them all if I tried, so I won’t even try. What I belatedly came to realize was that my insight of those many years ago, hard-earned as it seemed, was also wrong. Books did left their mark on me, through the choices they made me imagine, the points of view they advocated, the many sorts and flavours of human emotions and social interactions. Books taught me politics and honour and why cats always land upright. They made me laugh. They made me bleed. They made me who I am.

You are what you read.